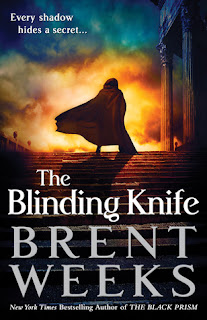 Title : The Blinding Knife (Lightbringer #2)
Author : Brent Weeks
Number of Page : 625
Publisher : Orbit
Gavin Guile is dying.He'd thought he had five years left--now he has less than one. With fifty thousand refugees, a bastard son, and an ex-fiancée who may have learned his darkest secret, Gavin has problems on every side. All magic in the world is running wild and threatens to destroy the Seven Satrapies. Worst of all, the old gods are being reborn, and their army of color wights is unstoppable. The only salvation may be the brother whose freedom and life Gavin stole sixteen years ago.
Review:
Of course, I will like the sequel as well. The world building and characters are getting more awesome.
For me, the second book is much better. I love all Kip's scenes. I found him so funny with his sarcastic and self-deprecating attitude. His learning experience at school was very interesting and entertaining to follow. I could see so much development in his character during his study and encounter with new friends. Even his meetings with his horrible grandfather were so amusing. I found myself laughing a lot watching him getting frustrated and rebellious at the same time.
Meanwhile, Gavin was in trouble. He lost his colors and he tried so hard to hide that fact from everyone. He became more obsessed with his objectives and ignored all things. It was quite sad, especially now that Karris knew his real identity. They could be together at last, but Gavin had no time for that. The tension between them was so apparent and I just kept hoping they would talk heart to heart, confessing their feelings.
As expected, Liv would be the main source of the "antagonist" side. She was still not sure whether she took the right side by following the Color Prince invading kingdoms. Her conflict within herself was good because the Color Prince was not really in the wrong. I even found his motives were so convincing. But, I still could not connect with Liv's character. I kinda wanted to skip every chapters about them because Gavin and Kip were much more interesting to read.
The only complaint I have was about the real Gavin. I thought he would play bigger roles, but sadly no.
Next book, here I come!
5/5
at September 29, 2020