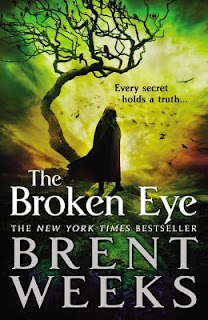 Title : The Broken Eye (Lightbringer #3)
Author : Brent Weeks
Number of Page : 864
Publisher : Orbit
As the old gods awaken and satrapies splinter, the Chromeria races to find the only man who can still end a civil war before it engulfs the known world. But Gavin Guile has been captured by an old enemy and enslaved on a pirate galley. Worse still, Gavin has lost more than his powers as Prism--he can't use magic at all.Without the protection of his father, Kip Guile will face a master of shadows as his grandfather moves to choose a new Prism and put himself in power. With Teia and Karris, Kip will have to use all his wits to survive a secret war between noble houses, religious factions, rebels, and an ascendant order of hidden assassins called The Broken Eye.
Review:
This book was where Kip and Teia really shined as characters. I always thought Kip was so funny and witty before. But, here his intelligence was shown in every situations now that Gavin Guile was absent. Nobody could save him from Andross Guile other than he himself. I really loved his interactions with other Blackguards. Also, Cruxer became one of my favorite side character ever. He was so kind and just, but he could also be unforgiving.
Teia also played a lot of important roles in this book. She was trained as a spy for the White and she had to infiltrate the Order of Broken Eye, a group of assassins who was so mysterious and unpredictable. Teia basically existed under the light, operating in the dark. I like how paryl was actually one of the most powerful color. The versatility of its usage was quite scary.
Meanwhile, Gavin Guile was reduced into a ship crew. He lost his color and he could only row and row and row. Sad, really. He didn't show much in this book other than rowing.
This book explores more about the Lightbringer and how Kip's friends all thought that he was the Lightbringer in the prophecy. I wanted to know more about this, but of course there were more things going on. The political situations in the Chromeria was also quite unstable. The White and Karris together had to battle with Andross Guile.
The story is so epic. I thought it would be quite simple, but then Commander Ironfist revealed his identity at the end. I was like... what? Grinwoody was also an important character. Another what???
I need the next book immediately.
5/5
at April 30, 2021