Charlie Bone And The Time Twister 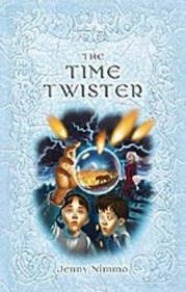 Charlie Bone started his new term hoping that there wouldn't be any strange things happened in his life. However, one day he saw a boy emerging in front of him. It was Henry Yewbeam, his great grandfather's brother who was lost many years ago.

It was found that Henry had traveled through time using the time twister. Many years before he made his cousin, Ezekiel Bloor angry. Ezekiel or Zeke was the one who gave the time twister to Henry, deliberately sent his cousin away.

Now that Henry met Charlie, he became Charlie's friend. But, the old Ezekiel knew Henry was back. He wanted to kill Henry and Charlie had to save him.

Once again Charlie had to face his enemy. The Bloors might want to eliminate him also.

Ah, it's more interesting than the first book. Now I know that the evil old man in the first book was Ezekiel Bloor. And I was caught surprised because I didn't expect that Charlie and The Bloors shared the same ancestor. There's even a family tree in the early page which depicts the long and complicated relationships between Charlie and the original founder of Bloor's Academy.

I like the ending for Henry. The meeting between him and his brother, James who was Charlie's great grandfather was quite touching.

And by the way I still hate Grandma Bone and his sisters. I wanted to send thunderstorm to them, like Tancred did. How could they be so mean to their own grandson? Grr...

The writing is still unlikable, lack of descriptions here and there. But I think I am growing used to it, so it's okay.