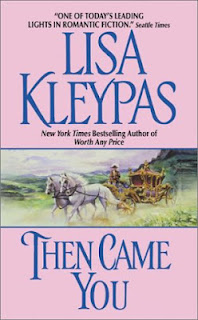 There is a reason why I dare buy Lisa Kleypas' books. I love historical romances and Lisa Kleypas always gives me unique themes that interest me. For this book the theme would be about gamblers. I like all the things about card gambling (eh, I don't gamble although I am an addict to the card games) so I'm definitely excited to read this book.

Anyway, enough for the babbling...

The story was about Lily Lawson. In family, she received less love than her sister. In marriage, her fiancee left her in the altar. In love, she fell into the wrong man who ruined her lives. And that made her hating men in general.

Lily had a daughter who was kidnapped by the father, Giuseppe. I surely didn't know why a father could kidnapped his own child and threatened the mother for money! For the sake of seeing her daughter again, Lily paid a great amount of money to Giuseppe and lost all her inheritance for nothing. Giuseppe never once let Lily seeing her daughter.

Desperate, Lily came to live in gamble house. The owner was Derek Craven. They were friends although a man like Derek was not really ideal to be called friend. He was mean sometimes.

For two years, Lily live under Derek's name protection. She learn gambling to get money for paying Giuseppe. Until one day, Lord Stamford came to ask for her help. He fell in love with her sister but her sister was already engaged to Alex Raiford. Stamford begged Lily to help him freeing her weak-willed sister from Alex. Lily agreed to see what kind of person Alex was before deciding whether to help Stamford or not.

And Lily found that Alex was unlikable. Therefore, she arranged plans to destroy her sister's marriage. Way you go, Lily! Hahaha... I liked all her plans. Wicked, cunning, and funny. She even kidnapped Alex's brother!

Lily was successful, of course. But, the angry Alex wanted to take a revenge. On the gambling table! One night with Lily vs money which Lily desperately needed for paying Giuseppe. And she lost.

Oh, my GOD! I was almost fainted with excitement. Hahahaha...

Okay, I won't tell the rest.

Most of the time, in romance books I like heroes more than the heroines. But not with this book. I love Lily and adore her strong natures. She never gave up and that was what made Alex fall for her deeply. Ah, I just like the story.

My complaint is only for the last hundred pages. What started as interesting plots was gone. It was getting boring at the end, I'm not sure why. Maybe I just like the "chasing" part. After Lily and Alex married, the story didn't intrigue me anymore.

But still, it was an interesting read after all.