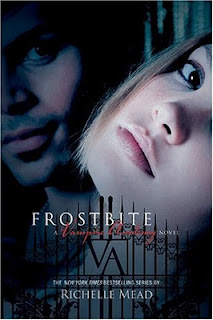 I prefer the story of book one because there are more suspense, mystery, and hidden secrets. In Frostbite, the enemies were very clear, the strigoi. They planned to kill all royal moroi.

Rose changed a bit. She now considered her actions more, she was less reckless and bitchy. And that was because of Dimitri, her mentor. Maybe the Zen-life lectures of self-control from him did have effects to Rose's rebellious natures. Or maybe it was simply because Rose really loved him.

Rose was supposed to take practical exam. The person who would gave the test was a legendary dhampir. But when she and Dimitri arrived at the place, the legendary dhampir and his royal moroi had already been dead, killed by strigoi.

Royal moroi were getting anxious and scared. They decided to put all the students from St. Vladimir academy in ski resort exclusively for moroi. Well, I felt bored in this part. Nothing important happened here because all moroi were protected. Mostly ski resort part told about drama between Rose and her mother, Rose's new "friend" Adrian Ivashkov, and her relationship with Mason.

It started to get interesting when Mason, Mia, and Eddie ran away to Spokane, which was said as one of strigoi nest. They were foolishly believed that three untrained students could beat powerful strigoi.

Rose knew and she asked Christian Ozera, fire moroi who was Lissa's boyfriend to help her dodging the guards. But, in the end Christian also joined the forces. After that, there were more fighting and more adventures which were very good.

Christian Ozera!!!! He was that cool, damn.

Sadly, someone died here. T.T Why oh why? I like that character and in a matter of seconds he/she (no spoiler) was dead. Rose was shocked, so was I. I cried when Rose became so angry and devastated seeing the death that she took revenge in a dramatic way.

Dreamer is so agitated, wanna continue reading but final date line is close...